Video sneak of Nicki Minaj single 'Right Thru Me' 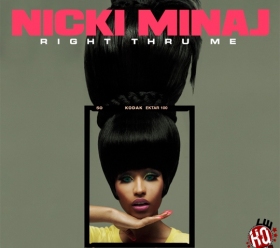 Beside "Check It Out" clip she shot with will.i.am, Nicki Minaj also has another music video to look forward to. It's filmed to support her single "Right Thru Me" and will explore the "boy-and-girl relationship drama" which was already teased in a behind-the-scene footage.

Coming out via Entertainment Tonight, the sneak peek opens with upset Minaj yelling at her on-screen boyfriend. "[It has] all of the intimate stuff as well as the fighting as well as the self-reflecting type stuff," she explained more about the concept. "It's basically just a love story told from the perspective of a very hard girl who doesn't want to give in but she has to."

Of the song itself, she said the track is very personal to her. She added, "I haven't spoken about an authentic relationship since I've come out. So this is my first time where I'm speaking about something very, very authentic that everyone in the world can relate to."

"Right Thru Me" is taken from Nicki Minaj's debut album Pink Friday which is set for November 23 U.S. release.