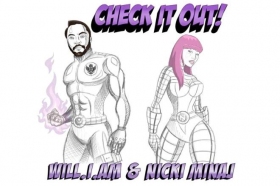 This is Nicki Minaj's official music video directed by Rich Lee for her duet track with will.i.am, "Check It Out". Along with the Black Eyed Peas member, she performs the track in a futuristic Korean TV show in front of a small audience.

Despite the Korean theme, Minaj said they're "doing almost like an ode to Japanese culture and Japanese anime." She added, "I'm obviously a big fan and I've joined forces with like the only boy that I know that's also able to capture that culture."

"Check It Out" is expected to appear in Nicki Minaj's upcoming first studio effort Pink Friday. The song was released last month and peaked at No. 14 on Billboard Rap Songs chart, and the album will come out in the United Stated on November 22, one day earlier than the original release date.