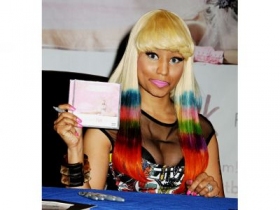 As Nicki Minaj's debut album Pink Friday is officially on the streets and to further enhance the sale, the rapper made some appearances both on screen and off. A day after the U.S. release (November 22), she showed up at Best Buy Union Square, New York City to sign the new CD.

As always, the Young Money artist showed up in many different tones of colors, including on her hair. During the occasion, she posed for the photographers after greeting fans. She showed a compassion when hugging a fan who is wheel-chair bound. Thank u to the amazinggggg ppl @ BestBuy tonite!!!! U guys gave me LIFE!!!!!, Nicki wrote on Twitter.

Earlier that day, she dropped by MAC store near Times Square and radio stations Power 105 and Z100. Her public appearances that day were captured by MTV cameras and would be compiled in a documentary airing Sunday, November 28 at 10/9c.