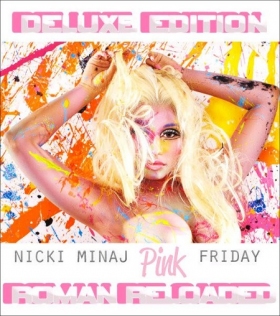 The female Weezy, Nicki Minaj has recently unwrapped the artwork of the deluxe version of her upcoming album Pink Friday: Roman Reloaded which sees the songstress wearing lot of vibrant colors, a blonde wig and a top, similar to previous artwork for the standard package.

The "Moment 4 Life" rapstress is pictured from the shoulders up, so she gives the camera an eyeful look at the top of her boobs. Despite her wilder appearance, she looks more mannequin-like in this new artwork.

Minaj's new album is set to release in the United States on April 3. Meanwhile, Britney Spears' fan site BreatheHeavy has reported that the pop princess may hit on Nicki's album. The track allegedly called "Masquerade" could possibly serve as their second collaboration after "Till The World Ends (Remix)". At the same time, Nicki spoken with Vibes about the album: "It's going in a very free, exhilarating direction in terms of me owning who I am and me enjoying the process of making music. I think that when you get the album you'll feel as if I had absolutely no boundaries. That's probably the best way to explain it so that you understand. The album just has no boundaries. The album cannot be boxed in."