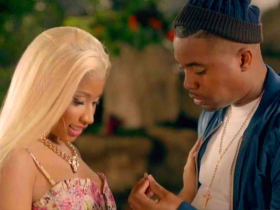 Nas joins female rapper Nicki Minaj in her newly released clip for the Chris Brown-collaboration single "Right by My Side" in which he plays Nicki's love interest. Nas is actually the rich guy who knows how to satisfy his lady: offers her lavish gifts, such as diamond rings, a sport car, takes her to shopping and enjoy nice lunch-time. They seem to break up for one moment, but Nas comes back to her.
Meanwhile, crooner Chris Brown portrays the romantic one who serenades her with his sweet lyrics. The female rapper returns the love by cuddling up to Breezy and locking lips with Nas at the end of the Benny Boom-directed clip. The video is not as impressive as expected, and the story could have been more clearer. When one of her Twitter followers asks whether she's nervous about the kiss scene, she replies, "Yes. Very :p."

Watch the video in here.

Nicki Minaj "Right by My Side" feat Chris Brown:

Right by My Side is taken from Minaj's latest studio album Pink Friday: Roman Reloaded, which has been released since April this year. A promo tour in North America is going to be kicked off on July 16 in Chicago, IL. She's additionally set to perform at Hot 97's Summer Jam music festival on June 3.