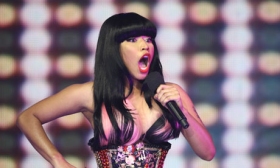 The song first emerged via Hip Hop Connection and was quickly posted on the official Young Money YouTube channel. In it, the Young Money MC is amazed at how transparent her feelings are despite her effort to hide behind the walls she built.

Minaj hasn't commented on the leak. The last time when her song "Your Love" was leaked, she didn't plan to release it as a single, but she was taken by surprise when it finally reached No. 1 on Rap Songs chart and made her the first female rapper to top the list since Lil' Kim reigned it in 2003.

Most likely the track will appear on her upcoming debut album "Pink Friday" which is due November 23 in United States.