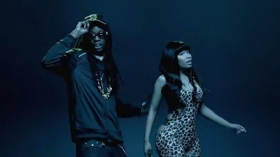 While Nicki shares pics from the video set of her "Starships" upcoming clip, she also premiered the music video in support of her 2 Chainz-assisted track "Beez In The Trap". The female rapper provocatively moves her assets which is clad in a leopard-print and a neon-green bikini. She also seduces the camera from behind a wire fence. Directed by Benny Boom and shot in Miami, the clip also features cameos from 2 guests 2 Chainz and Cash Money label boss Birdman.

"Beez in the Trap" is taken from Minaj's newly-released studio album Pink Friday: Roman Reloaded. She's currently busy promoting the CD by doing a round of interviews and performances with the most recent ones on "Today" show and a Nokia launch party at the Times Square. More, on April 7 she meet with her fans in Los Angeles at the Easter Bunny when she shut down Best Buy at Westfield Culver City.

Next, she eyes to travel the world for a tour. "I'm just looking forward to touring and performing for everyone because I put out the first album ['Pink Friday'] and I didn't really tour the world," she explained. "And I feel like now I have to get out and do it now or never."

Nicki's new clip has over 3 million views on YouTube in 3 days, and you may watch it in here: