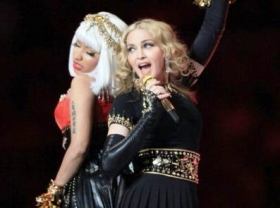 After performing at the Super Bowl last week and released a new video along David Guetta, the female rapper Nicki Minaj has announced she is set to premiere a brand new single at the upcoming 54th Grammy Awards. Days leading to the event, the female rapper confirms on her official website that she's going to perform "Roman Holiday", a new song from her upcoming album "Pink Friday: Roman Reloaded". The track will go on sale on iTunes immediately following the show.

On top of that, Nicki has announced a new single coming up the follow Monday called "Starships" which will debut on Ryan Seacrest's radio show, and will release it for digital download on iTunes on the same day. Her busy February will continue with a performance at the 2012 NBA All-Star Game in Orlando, February 26th.

2012 Grammy Awards itself will be held on February 12 at the Staples Center in Los Angeles. LL Cool J is tapped as a host, Alicia Keys and Bonnie Raitt will pay homage to Etta James, while Drake, Gwyneth Paltrow, Miranda Lambert and Dierks Bentley, Jack Black, Stacy Ferguson (Fergie), Marc Anthony, Lady Antebellum, Seacrest, Ringo Starr and Questlove will be the presenters.