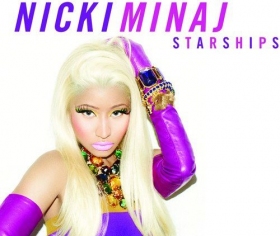 Today, February 14th the song just hit the web and it sounds like another club-anthem of which Nicki is truly enthusiastic about. During the interview, she shared with Ryan: "Starships is one of my absolute, absolute favorite records on 'Pink Friday: Roman Reloaded'. It just sounds like a Ryan Seacrest-type of record. And I'm so excited for you to give this song your blessing, Ryan, because I know people are gonna love it. It feels right. It just feels good. It makes people feel happy and that's all I want. I want to start the year off with making people feel good. The Grammy performance was the performance, that was my clear craziness, and now it's time to make people dance and have fun, and that's all I want to do." Listen to Nicki's new single "Starships" in here:

On Monday, Nicki also posted the single artwork in which she is seen wearing pink and purple and blond hair. 'Pink Friday: Roman Reloaded' due April 3rd.