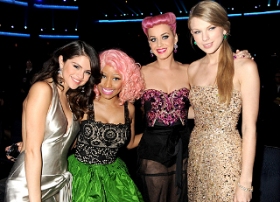 This years, the American Music Awards 2012 is expected to be a great show, where we will be a good mix of country, rap and rock music. The artists that confirmed their participation on the show are Taylor Swift, Nicki Minaj, Christina Aguilera and the band Linkin Park. The announcement was made Wednesday, October 25 by the show organizers.

The rapstress Nicki Minaj leads the most nominations for the night, along with Rihanna. They are up for four awards each, including the Favorite Female Pop-Rock Artist. The country singer, is nominated to Favorite Female Country Artist, and Linkin Park is hoping for Alternative Rock Award.

Other nominees are Justin Bieber, Katy Perry, Maroon 5, Drake and Rihanna for the Artist of the Year, while Carly Rae Jepse, One Direction, Gotye, J. Cole and Fun are competing for the New Artist of the Year trophy.

The AMA 40th annual ceremony will be broadcast live from Los Angeles Nokia Theatre event on November 18, where Christina Aguilera will debut her new track "Your Body".