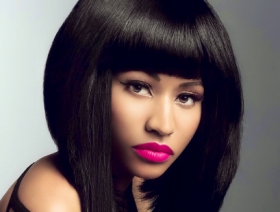 Before she kicks off with a new tour in the UK Pink Friday: Roman Reloaded, the female rapper Nicki Minaj premiered the music video in support of her single "Stupid H--". She is screening in lot of outfits, and many wigs too. She launches an attack on her enemy (allegedly Lil' Kim) while sitting behind the wheel of her pink car, or dancing in a cage with feline lookalike outfit.

The vibrant video comes from the hands of prodcer Hype Williams, and was released online as she explained: "b/c its important that my art is not tampered with, or compromised prior to you viewing it for the 1st time". Just soon after the video was unleashed, Nicki announced on Twitter that the Pink Friday: Roman Reloaded album is pushed back: "New Album Date: April 3rd. Pink Friday: ROMAN RELOADED. But have no fear. Tons of surprises before then ;). Love Always, HB,"

On top of that, the female rapper has announced she's ready for her UK tour starting next month: "Its official. I reunite with the barbz and roman empire from feb 20th – feb 29th…(Leap Year)…in the UK… ", she wrote on Twitter. Details about official live shows have not been released yet. Check back soon for more.