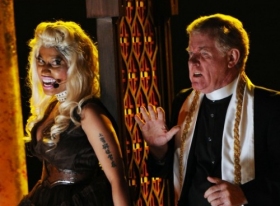 The Young Money femcee spends lot of time lately releasing new songs off her upcoming material, and recently revealed a collaboration track with rapper Lil Wayne titled as the album itself <b."Roman Reloaded". The track sounds pretty different from the other tracks released so far - "Starships", "Roman Holiday", "Young Forever", "Stupid Hoe", or "Marilyn Monroe" - and raps in a big style: "I guess I went commercial /Just shot a commercial /When I flew to the set though, I ain't fly commercial." And she also brings in her controversial Grammy performance singing : "You mad I brought the Grammys to the Vatican."

Her Young Money co-star Lil Wayne comes in on the second half of the track with two more verses. He even sounds breathless by the song's end, because keeping up with the female Weezy is hard, even for the actual Weezy. The single hits iTunes today, Friday Febr. 24th.

Nicki's Pink Friday: Roman Reloaded is due to release on April 3rd. "Roman Reloaded" seems to be a return to the hard-core rap style Nicki first entered the game with on mixtapes like Beam Me Up Scotty. Not only does the reigning rap queen throw shots at other rap chicks, she puts all her accomplishments on full display shouting out Mattel and their commemorative Nicki Minaj Barbie doll and toasting her inclusion on MTV News' Hottest MCs in the Game VII list.

On Sunday, during a half-hour special on MTV2, the YMCMB queen was announced as the #4 Hottest MC, and she must have hit the vocal booth soon after to lay the vocals. "Hottest MCs top five/ You need money, I got mines," she told MTV with an unwavering confidence.