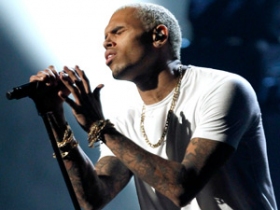 Young Money female rapper Nicki Minaj teases her fans with some new music off the upcoming Pink Friday: Roman Reloaded, and this time she unleashed an unexpected collaboration with RnB crooner Chris Brown. The track is titled Right By My Side and sounds really dope! Nicki shows more of her pop side in this new song, which will serve as second single of the album, due to release in the US on April 3rd. We love the sound, the catchy lyrics and the story the two developed through lyrics: "It all comes down to this/I miss your morning kiss," sings Minaj. Though broken apart, Brown and Nicki portray lovers pining for each other. "Let's meet at our favorite spot/You know the one, right around the block," comes in Brown in his portion, before Minaj launches into one of her famously raunchy raps: "When my pussy game so cold that he always seem to come back/Cause he know that it'd be a wrap/When I'm riding it from the back," she spits at one point.

Nicki Minaj "Right By My Side" ft Chris Brown

But she didn't stopped with Breezy collaboration, and she unveiled a second track off the album Beez In The Trap which features rapper 2 Chainz in which she develops much her rappin' skills. Take a listen below.

Earlier this week, Nicki Minaj announced a short UK tour for this June. The tour begins with two shows at London's HMV Hammersmith Apollo on June 24 and 25, before moving onto Birmingham's NIA Academy on June 26. Minaj wraps up the tour on June 28 with a show at Manchester's O2 Apollo. Nicki Minaj will also play a number of this year's summer festivals, with slots booked atT In The Park, V Festival and Wireless Festival.