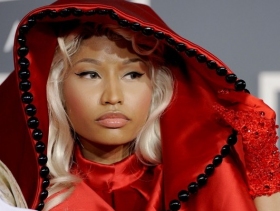 The Young Money femcee Nicki Minaj debuted her much anticipated song "Roman Holiday" last night at the 54th annual Grammy Awards ceremony, held at the Staples Center in Los Angeles. Introduced by her labelmate Drake, the evening's most complicated and elaborate performance, she began on stage with "The Pope" (really just a weird old man from central casting who walked the red carpet with her), and began "confessing" the spooky lyrics to her new single "Roman Holiday".

Things only got weirder, as the show cut to a pre-taped segment that featured the same holy-man character showing up at a house for an exorcism. Who needed a demon purged? Minaj herself, who haphazardly put on lipstick and sang the lyrics to "I Feel Pretty" to herself as she climbed up the wall. Eventually, the action cut back to the Staples Center stage, featuring lots of stained glass and a small army of monks. Minaj was strapped to a Frankenstein-esque lab table, eventually managed to escape and rap through the remainder of the song.

The one great moment was when Minaj levitated in what might have been an homage to The Craft. Watch below Nicki's performance.

Nicki Minaj walked empty handed that night. She was up for Best New Artist, but lost it to Bon Iver. She additionally vied for Best Rap Performance and Best Rap Album, but had to give them up to Kanye West. The G.O.O.D Music rapper won the former category through his duet with Jay-Z in "Otis".