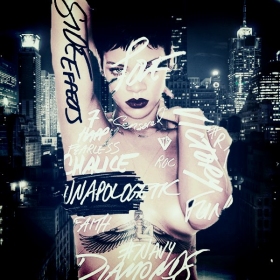 Rihanna revealed her new cover image for her latest album, which will be entitled 'Unapologetic.'

The image was released Thursday on Twitter and shows the singer topless, showing a big new tattoo, covered with representative and essential words in black and white.

'Unapologetic' is Rihanna's seventh album and will be released on November 19 worldwide under Def Jam Recordings. The album's significance: "Unapologetic = Unwilling to make or express an apology," she tweeted.

The superstar debuted her newest and the lead album's song "Diamonds" last month. "It's laid-back but it's hopeful. It's a record that... gives me such a great feeling when I listen to it. The lyrics are very hopeful and positive, but it's about love," Rihanna said about the single.

What do you think about her new cover?