Took a drink from the bottle in my coat

I can smell it now like it was yesterday

The cold November winds biting round those Bradford streets

Going downtown to the club where your band used to play

Well the years go by, and the choices come

We fall by the wayside one by one

Ch: And there's nobody left but you now

There's nobody left but you

Stevie he was always just the quiet one

Got married, got buried the way that people do

Came back ten years later, tried to make up he was still young

But you, your monsters became your friends

And you'll carry them with you till the bitter end

Only you, only you

Somehow you survived, well I don't know how

And you still burn the same, maybe a little slower now

You remember the winter of '79 and going down in the rain to the Royal Standard to watch the Ruts play? 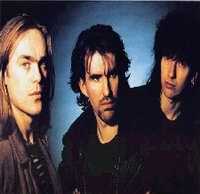