NEW BOYZ - Give It Up (Rangers Diss)

Give It Up For Them

Give It Up For Them

Okay lil homies tryna diss and I don't know why

U dance to my songs like a little cheerLeader

Now you want to be a rapper

But that dont work either

(Dissin) none of yall dudes really know me

Gettin on these dudes, when I'm not in the mood,

Make that clear I own time

Day Day look like one of the characters from Good Times

Goodmenn said &quot;If you want to talk do it silently&quot;

They kill for me I'll put you out of your misery

Y'all mentally unstable my n***** like kids you see.

(They wear the same clothes) Well at least they share

Y'all give it up for Julian &amp; the Strangers

Tell ya girlfriend I don't want no pics

But her brain on point, you don't want no kiss

Just because we ain't bring y'all to 106

All the number one dimes can't wait to see me

Sat on a head more times than Langston's beanie

Only b**** he got wet was his mermaid tat

Why y'all on that n**** dick man he dissed yall too

Got a little fanbase, need to pray for some more

Dude I perform for pay, why y'all pay to perform

Their manager's a square and, I'm the first to say it,

If the coach cares then why yall aint in the game yet,

Besides Yung3rd, none of ya flow famous

I swore I say day day on a commercial for Haiti

Thats a low blow something like your girlfriend do

While when ceejay left all yall fans did too,

We already in the building, Yall just knock on doors

And we aint got to jerk, thats wat we got yall for. (Now give it up)

Spotlight you think you all that

aye what about langston trying to go to the power 106 games and acting like the new boyz and shit,

The only thing you doin is acting like the mother ****** fake boys tryin to get all the attention.

Then who else we got over there

Who else we got

Julian you went to go see avatar and you thought it was the last air Bender,

Umm let me see who else we got 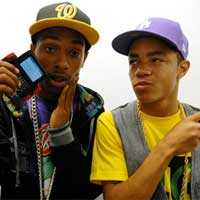