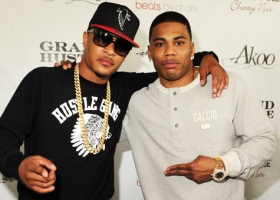 “Baby girl you should call me tonight” sings Nelly in his latest single, “IDGAF,” for which he teams up with Pharrell and T.I.

The track will be appearing on Nelly's upcoming eighth studio album, M.O, which is due to be released on September 30th. The album includes collaborations with Future, Wiz Khalifa, Nicki Minaj, Yo Gotti, Nelly Furtado, and Trey Songz.

“IDGAF”, which stands for “I don’t give a fuck”, is the second tune on M.O. in which Nelly and T.I. collaborate, the first being the “Rick James” record. While T.I.’s contribution on the album limits only to singing the chorus, Pharrell’s, on the other hand, is more substantial, him being the person in charge of taking care of the production.