"I'm always trying to get deeper into music," says Marshall Crenshaw. Anyone possessing the slightest acquaintance with the music Crenshaw has made in the 18 years since his first self-titled record in 1982 knows that it has been ever thus. Each record finds Crenshaw further refining his craft: the writing and recording of meticulously rendered songs that manage to sound as spontaneous as a sigh. His first record since 1996's Miracle of Science, #447 (so named to convey a sarcastic "here's the umpteenth Marshall Crenshaw record" tone), demonstrates Crenshaw's continuing growth as a musician.

After nearly a decade living in the rural environs of Woodstock, NY, Crenshaw moved his family to Brooklyn earlier this year. There, he began to work on most of what became the songs of #447, along with some writing partners like Richard Julian and David Cantor (in New York), and Bill Lloyd and Bill DeMain (in Nashville). Crenshaw says, "it was great to work with these guys. They're all really good, and things proceeded with a minimum of psychic wear and tear. One co-written song in which Crenshaw took a dominant role lyrically is "Ready Right Now," a dark, minor key song that seems so foreboding that its subject matter is unlikely. "It's my fatherhood song," he explains, "There's something kind of fearsome and daunting about how you love your children. There's joy in it too, but..."

When it came time to record, Crenshaw would typically head up to his studio at his Woodstock home to lay the foundation for the tracks. He had already completed the mournful "Television Light" two years ago for use in an unreleased film ("Pants on Fire"). But it was another production that influenced #447 the most. "At the same time I was working on the album, I was working on this documentary about Yogi Berra," he says, "I worked from an outline. There'd be a music cue that might say "melancholy", or "celebratory." The acclaimed documentary, "D閖?vu All Over Again" was broadcast in August on PBS with the music Marshall composed. A pair of lush instrumentals from the Berra documentary, "Eydie's Tune," and "You Said What?" are included on #447 and reflect Crenshaw's growing interest in jazz.

"I'll never be a jazz musician, but I love the stuff, and it's been coming into play as an influence a lot lately." Further evidence of this can be heard on another instrumental, "West of Bald Knob." "I was thinking of this album I love by the Ginger Baker Trio, 'Going Back Home', he says of the genesis of the tune. "This is my version of (guitarist) Bill Frisell with two broken fingers, and (drummer) Ginger Baker after he just woke up from a nap." He also cites jazz drummer Idris Muhammad and classic Wayne Shorter records as particular faves.

After finishing most of the rhythm sections in Woodstock (he plays all of the drum parts as well as the lion's share of the guitar parts), Crenshaw embellished upon the tracks at Nashville's Alex the Great studio with help from longtime bass player and cohort Brad Jones. "Mainly, the sound of the record, from top to bottom is tubes: tube microphones, tube amplifiers, tube tape machines, tube processing at the mastering place. And there's a lot of vintage equipment like the mellotron on the record. I like the sound of old records."

But Crenshaw adds: "I think that right now is a really good time to be making records, because you've got a whole century's worth of recording technology to pick and choose from, along with a lot of new stuff that's really user-friendly. We used a lot of nineties boxes on this record, like an Antares pitch corrector, which smooths out vocal tracks and," he remarks with a chuckle, "reduces anxiety and increases self-esteem." He also employed an Ampfarm, a computer that replicates vintage amplifier tones, and lots of digital editing and "ass covering".

Whenever possible, Crenshaw shot for a live-in-the-studio vibe. "I still think there's something priceless about the sound of having a group of people in a room," he says, "When groups of musicians play together, there's some kind of adrenaline thing that happens." Pedal steel and dobro specialist Greg Leisz, double bassist Dave Hofstra and hotshot guitarist Andy York, among others, ensure that #447 is no antiseptic one-man-band job.

In his own modest way, Marshall Crenshaw continues to reinvent the wheel of pop music. "I'm a little smarter than I was then, a little better than I was then. My skills are a little sharper." This statement rings true as one listen to the amazing #447. Marshall manages to improve upon perfection once again. 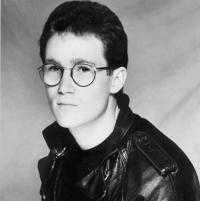