He escapes... his task is under way

One goal... to achieve the needed kill

Malevolence towards just one person and the innocent to his way

Only one... saw the beast within the man

Unknown to all the horror that will devastate their very lives

And consume their existence through many years of time

Search is on... but he's nowhere to be found

Lurking... returning to his home

A trail of terror marks his path with

Night has fallen all are victims of his dark intentions

One by one... the count of bodies grow

Leading to... the life who drives his urge

The search is over he's now found the one who

The time is now for all

To cover years of hate, only seen are his

Compulsion for one life desired parricide

Impulses in his mind

Knife in hand... he stalks his chosen prey

Within grasp... injuries slow escape, discovering the friends are

Murdered, cries for help may not be heard, a fear of death now consuming

The one man will soon rescue her

Inhuman, his soul will never rest

Almost captured she survives although she will be scarred for life

Unknown to her he still breathes and

Vengeance will not end tonight 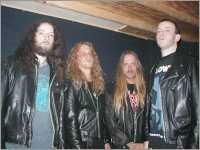