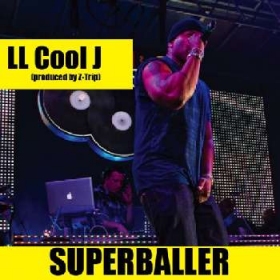 The host of the upcoming 54th annual Grammy Awards - February 12th, rapper >LL Cool J has debuted a new song called "Super Baller", which is produced by Z-Trip. The track is actually released in the spirit of celebrating the Giants' win at Super Bowl on Sunday, as Z-Trip shared with Rapradar:

"LL Cool J and I got so hype off the Superbowl game; we wrote and recorded this track last night! We did it quick and dirty; for the love. The track was done in 30 minutes.

Even though LL was sick he still sounds tight as hell! Check out the GOAT on 'Superballer' produced by yours truly.
Enjoy" – Z-Trip

The track is a mixture of sounding like a sports show intro and an old school record. For only thirty minutes in the booth his lyrics show how second nature rapping has become for him. Check out below LL Cool J's new song:

LL who already has 13 albums under his belt, hasn't released a new material since 2008. He only took some time as an actor, or made some guest appearances on popular shows such as "30 Rock" and even a starring role in "NCIS: Los Angeles" since 2009.