his is HPFW Base to Chocolate Starfish reading over

Was your mission completed?

Ben Stiller: Fuck Limp Bizkit, man. Jesus. Oh, I can put a Z in my name I'm bad. I'm never gonna move outta Jacksonville, living in fuckin Hollywood. You know this is my first uh rock slash rap album so, I'm kinda new to the whole pop world you know. This is a phat beat by the way... and I'm talkin

P-H &quot;phat&quot;. Thank you, to uh, DJ Lethal for this PHAT beat. Did you grow up with DJ Lethal, Fred? And did you call him DJ Lethal when you were kids? (That's just his name man) That's just what his mama named him huh? Oh, little DJ Lethal! Can't mess with Limp Bizkit 'cause we get it on everyday and every night so, back it up. You know what I'm saying?

Ben: What? No, no, no I think Limp Bizkit is great man.

Ben: Um, I like that you're so, fuckin, out there with your message, you know, &quot;Shut the fuck up man&quot;. Watch out Mom... big bad rock star.

Fred: Are you serious?

Fred: So obviously, your really don't, you're not down with the Bizkit.

Fred: And would you pay, are you gonna pay money to listen to this record?

Ben: This record? Which one, this one? You mean, Chocolate Starfish and the, Hotdog Flavored Water... ? SO yeah, cut the beat and let's start this shit up, ok. Come on and shut the fuck up and start this shit up. It's all crazy, thrash punk, pop metal to you but somewhere out therein the annals, ya know up there with Rod Stewart and, uh... uh... uh Rod Stewart- is the Bizkit, man I mean I'm talkin when you're limpin with the Bizkit, you're talkin about the major groups in rock n roll. Who else can take rap, hip-hop, thrash, punk metal- take it, throw it in a can, spin it around, and come out with something that wasn't fertilizer- and it was the Bizkit, the Limp Bizkit, man. And when they came on the scene, I don't care what you say; &quot;Counterfeit&quot; blew the fuckin people DOWN... TOWN!

Steph: Where you at?

Steph: Where you at?

Steph: You're in London?

Steph: What are you doin?

Fred: I wish I was eating fish n chips I dunno what I'm eating. Late night.

Steph: What time is it where you are?

Fred: I dunno. I'm trying to get ready to do another show

Steph: Dude, everytime I talk to you, you're getting ready to do another show

Steph: Yep... When are ya comin back to Cali?

Fred: Um, I think I've got, like, another week left here. I wish you'd meet me in New

York, we could kick it.

What's up Fred, Rob, I was trying to catch up with you

Had to go to the X-Games** and shit

Just let me, I mean

All Great Ramps and graffitied Walls**

Yo, what's up man, this is Mark

I don't know what happened last night; just wanna know if you're still in New York

Give me a call back, what kind of phone shit is that, you got here

You can check these motherfuckers before they call

Let me know what that shit is man; I gotta get me some nap 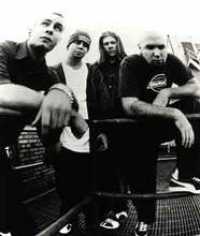