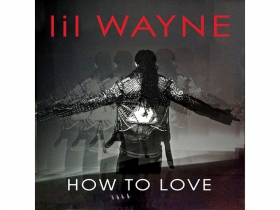 The artwork seems to emphasize that despite his usual fiery verses, the Young Money rap mogul does have soft side and it's hidden beneath the hard facade.

The ballad track which features sweet/broody verses has a kind of new sound for him and Weezy himself explained in a MTV interview:
"I can tell you that I've never had a single like it, and it's an amazing song. It's an amazing song." He added, "When I listen to it I get goose bumps. And I feel like the song is gonna take me somewhere that I've never been musically."

'How To Love' was recorded for Weezy's new studio installment Tha Carter IV due in the U.S. on June 21. A week before the album release, he will kick off the second leg of his I Am Still Tour at Comcast Theater in Hartford, CT with Rick Ross, Keri Hilson and Far East Movement.