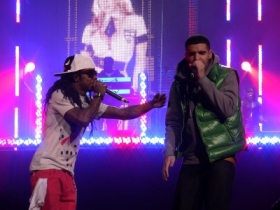 You should listen to the latest song of Drake... A new duet between Lil Wayne and Drake has hit airwaves and the radio rip has gone online. Entitled Right Above It, it is confirmed to be listed in Weezy's upcoming mini album tentatively titled I'm Not a Human Being which he recorded before going to jail.

Produced by KaneBeatz, Right Above It is triumphant, like the sound of a man who is getting out of jail and wants the world to know it. The noisy synths and the frolicking drums create this gladiator sounding record, similar to classic Wayne cuts like "3 Peat".

While staying in prison, Weezy still keeps in touch with his Young Money artists. With a laugh, the rap mogul shared during a recent phone interview with Funkmaster Flex, "I call Drake at least once a week, but I actually call three or four times a week, but he only picks up for me once a week."

Of the Not a Human Being, Lil Wayne stated, "Yes, it's gonna drop before 'Tha Carter IV', only on the Internet." Rumor has it, he will release it on his birthday, September 27.