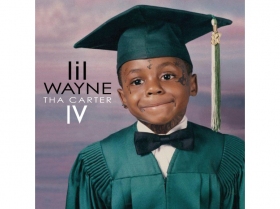 Lil Wayne has unveiled a picture which will be featured on the front page of his upcoming CD "Tha Carter IV". The artwork boasts an image of young Weezy wearing his graduation cap and gown. He has tattoos on his temple, forehead and neck.

Tha Carter IV was set to be released on May 16th but has been reportedly pushed back to June. Lil Wayne's first single from the album is 6'7" , which features one of the Young Money newbies Cory Gunz .