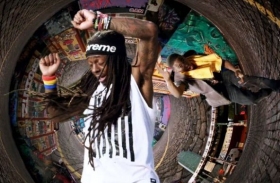 Dedication 4 was originally scheduled to drop August 15, but Wayne decided to hold off so that he wouldn't steal any of the spotlight away from his homie 2 Chainz, who dropped his debut album this week. At the same time, Weezy's mixtape is reportedly not even finished yet. "I ain't even gonna lie. I didn't even finish that motherfucker," he admitted in an online video. "I've been skating and shit, falling and breaking shit, and all that type of shit. But I give it to you like next week."

This project will mark the first for Wayne since he dropped his Tha Carter 4 album last summer.