Lil Wayne makes duet with Eminem on SNL: No Love and 6'7&quot; 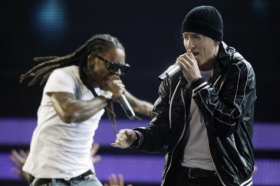 Check out the rap duo Lil Wayne-Eminem that rocked the house of Saturday Night Live on December 18. Boys teamed up in No Love before the Slim Shady spat verses from Pink-assisted song Won't Back Down and then left Weezy to take charge on his brand new song 6 Foot 7 Foot.

The weekend performance was Weezy's first TV appearance since he was released from jail in early November this year and his second "SNL" gig following his performance in the 2008 season premiere of the TV show. As for Eminem, that reportedly was his return to the late-night show since his 2004 appearance.

Watch their performances below:

The show was hosted by Tron Legacy star Jeff Bridges - read his biography here. Some other guests included Akon who appeared with The Lonely Island in digital short featuring the group's new song "I Just Had Sex" and Blake Lively who joined forces with Jessica Alba in the sketch.