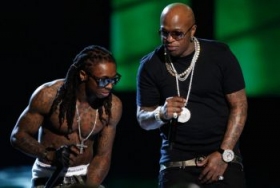 "They say it cost to be the boss, I paid the price including tax."

Fans do not have to wait long to hear Lil Wayne's first post-prison studio work as a song featuring the rapper has just hit the web. Previously leaked without Weezy's rhymes, the track called Fire Flame and featuring Birdman on the lead is posted on DJ Khaled's official blog.

Fresh off from my bid, bh it's little Tunechi/ I Lucille Ball, bh, I Love Lucy, Weezy spits them out before continuing, I'm so relaxed, my Gucci flats ain't got a scratch ... And if you got problems with it, well, I will fix them cataracts/ They say it cost to be the boss, I paid the price including tax.

According to Khaled, Fire Flame will be included in Weezy and Birdman's next joint album which will follow up their 2006 duet project Like Father, Like Son.

Listen to the Fire Flame Remix below: