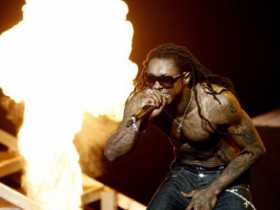 Lil Wayne has been caught with unauthorized contraband in his prison cell.

The rapper, who is serving a one-year jail term for gun crimes, was found with an MP3 player charger and headphones on Tuesday (May 11), during a routine search.

"We found the items wrapped in an aluminum potato chip bag, in a garbage can", a prison source told FoxNews.

Meanwhile, a subsequent search of the housing area where Wayne is jailed led to the discovery of an MP3 player in the cell of another inmate.

Both Wayne and the unidentified inmate will be charged with breaching prison rules, though it isn't clear what penalties the pair will face, or if it will affect the length of his sentence.

From his lastest album "Rebirth" released in february we remember you "On fire" :