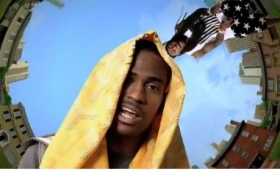 And when you'll watching it here will be some of the things you'll find in Lil Wayne's neighborhood: a pink elephant, a guy in a Panda outfit, Lil Wayne in leopard print shorts, dogs walking people, models having sex with lawn ornaments, Big Sean rapping alongside a skeleton, smoke machines, Lil Wayne skateboarding, and dinner parties featuring models in various masks and Big Sean as the platter.

Topping off the strange occurrences, skeletons fill the seats of the local movie theater alongside other famous rappers Birdman, Mack Maine, but also Wayne's daughter, Reginae.

"Truk your girl," Lil Wayne belts out in the video, exclusive to Mobli, before skating away into the foggy darkness. "My Homies Still" is the debut single from Wayne's upcoming I Am Not a Human Being II. As of date, the song stands at No. 27 on the R&B/Hip-Hop Songs chart.