Lara was born in January 1970, in the Belgian town of Etterbeek. Her Flemish father and Sicilian mother, inspired by the theme song of the film Doctor Zhivago, named her Lara. From the age of five, Lara knew she wanted to sing. Accompanied by her musician father, a former guitarist and backing vocalist for Petula Clark, she began her singing career at 14 in Brussels' boîtes à chanson. A few years later, she entered a number of European competitions and won several prizes. Then, at 18, she sang the song "Croire" in the prestigious Eurovision competition and was awarded fourth prize.

It was at this time that her first recordings, both on the French Tréma label, found an appreciative public. Her songs "Croire" and "Je sais" sold 500,000 and 300,000 copies respectively. A year earlier, she had recorded a first single, "L'aziza est en pleurs".

Following her European successes, Lara traveled to Quebec to promote "Je sais" and fell in love with the place. With her friend Rick Allison at her side, two suitcases and $1,000 in her pocket, she decided to embark on a career in North America. A first album, simply entitled 'Lara Fabian', that had been recorded earlier in Belgium was released in Canada in August 1991. The success of songs like "Le jour où tu partiras", "Les murs" and "Qui pense à l'amour" gave Lara the exposure she needed on the radio. Her skill as a songwriter was particularly highlighted with the success of the single "Je m'arrêterai pas de t'aimer", and her debut album went on to be certified gold in 1993 and then platinum the following year. Lara received several nomations at the 1993 ADISQ awards and a poll published around that time revealed that Lara was considered Quebec's most promising singer.

'Carpe Diem,' Lara's second album, was released three years after her eponymous album and proved that her popularity with the Quebec public was more than just a flash in the pan. In less than three weeks, the album went gold and three of its songs "Tu t'en vas", "Si tu m'aimes" and "Leïla" found themselves on the Top-50 radio hit parade. The following year, the album went triple platinum and Lara’s SRO tour attracted more than 150,000 fans. This phenomenal success was recognized at the 1995 ADISQ gala in which Lara received two Félix awards: Best Show Of The Year and Best Female Singer Of The Year (a category voted upon by the public).

In January 1995, at the request of Serge Lama, Lara joined the singer on the stage of the Paris venue Palais des Congrès to perform "Je suis malade", a song she had sung on her 'Carpe Diem' album. Upon seeing the audience's response to the duo, Serge Lama right away asked Lara to sing the song once more on her own to the great delight of those present. This contact with the French public was just a sample of what would come less than two years later.

The Walt Disney Studios immortalized Lara's voice in 1996 when they asked her to do the voice for the character Esmeralda and sing a song in the animated feature The Hunchback of Notre Dame. Disney also included Lara's French version on the English film’s soundtrack album beside that of Bette Midler's version, a first.

That same year, 'Pure,' Lara's third album, was released in October and went platinum in less than two weeks. For this recording, Lara was awarded a Félix for Popular Album Of The Year at the 1997 ADISQ gala and was also nominated for two Juno awards in the Best Female Singer and Best Selling French Album categories.

This recognition once again attracted the attention of movie studios. The producer of Daylight, starring Sylvester Stallone, entrusted her and Rick Allison with 'Tant qu'il y aura de l'amour', the French version of the song performed by Donna Summer and Bruce Roberts, and produced by David Foster.

When Lara signed a contract with the French Polydor label for several albums, French-speaking Europe was in for a stirring comeback. With the release of 'Pure' in June of 1997, Lara's European career skyrocketed. Sales of 'Pure' hit the 2 million mark, while the singles "Tout ", "Je t'aime" and "Humana" each sold more than 1 million records. In January of 1998, the French got the chance to hear Lara sing a duo with Johnny Hallyday at a benefit concert given for the Restos du Cur, as well as on Lara’s own tour that included two sold-out shows at L'Olympia. A month later, on that same stage, Lara was given the Discovery Of The Year award during the Victoires de la musique gala. Soon after, to satisfy public demand, Polydor released 'Carpe Diem' in Europe.

After a sold-out two-night stint at the Paris Palais des Sports in April, Lara was even more in demand. Once again she was invited to perform with Johnny Hallyday during several concerts given at the Stade de France in front of 240,000 fans. The following fall, Lara undertook a European tour that reached more than 100,000 fans.

Lara's tremendous popularity is perhaps exemplified by the famous Grévin Wax Museum's decision to unveil her wax effigy, as a Quebec City museum had already done. She thus became the first female Canadian singer ever to be honoured by the Paris institution.

By November of 1998, the praise was multiplying: in Quebec, Lara received the Félix award for Artist With The Most Recognition Outside Quebec at the ADISQ gala. Furthermore, in December, she was chosen Revelation Of The Year by the magazine Paris Match, which put her on its front page to mark this occasion.

Lara spent most of fall 1998 in France, where she embarked on an extensive tour of 24 cities including Paris, Lyon, Marseilles, Geneva and Monaco. During this sold-out concert tour, Lara performed in front of more than 150,000 people. In May 1999, Lara was honoured at the World Music Awards in Monaco, where she was given the award for Best Selling Record for the year 1998 for her album 'Pure.'

In July 1999, with over 6 million records sold across French territories, Polydor, in order to satisfy the demand, released Lara’s eponymous album. The European version of this early album contained slight modifications, such as a new album cover and the addition of the song "Croire".

In the summer of 1999, Lara crossed the Atlantic to record her first English-language album in New York and San Francisco for the Sony label. The songs were written and produced with the help of her partner Rick Allison and Dave Pickell as well as with Walter Afanasieff, Glen Ballard and Pat Leonard, who are all regular contributors to the work of several international stars.

If the past is any indication of what's to come, one can easily imagine that Lara's English-language debut album, simply titled 'Lara Fabian' will, once again, enthrall a new audience and then win over still more fans to her unique talent. 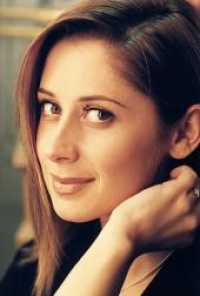