This is a list of episodes of the Japanese anime Kodomo no Jikan. The episodes are directed by Eiji Suganuma and produced by the Japanese animation studio Studio Barcelona. The anime is based on the manga of the same name written and illustrated by Kaworu Watashiya. The story follows a grade school teacher named Daisuke Aoki whose main problem is that one of his students, Rin Kokonoe, has a crush on him. A thirty-minute, uncensored, single-episode original video animation was released on September 12, 2007, available both on the anime's official website and in a limited edition version bundled with the fourth volume of the manga.[1] The televised broadcast contained twelve episodes and aired between October 12, 2007 and December 27, 2007 on the KBS Kyoto Japanese television network.[2] However, some of its content suffered censorship from animated panels, with some obscuring parts of the screen and using sound effects to "bleep" out dialogue in some instances, and others fully suppressing both audio and video. The uncensored version of the anime series were made available on DVD in six volumes containing two episodes each. The first such collection was released on December 21, 2007, with future releases to follow in one month intervals, ending on May 23, 2008. A second season consisting of four episodes, titled Kodomo no Jakan: Ni Gakki, was released exclusively on DVD between January 21, 2009 and July 24, 2009. Another OVA was released on January 23, 2011.

Rin, Kuro, and Mimi spend the day at various shops searching for a birthday present for Aoki and even buy a book of charms. However, after Rin runs out of money, they decide to stay over at her house for the night to make presents for him instead. There Mimi meets Reiji for the first time and falls in love with him. Kuro makes a voodoo doll of Aoki and Rin makes herself as the present. The next day, they go to school to give Aoki his presents.
Chronologically, this OVA takes place between the 4th and 5th episodes of the first season. 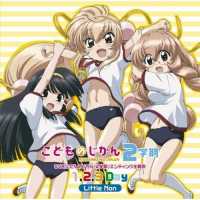