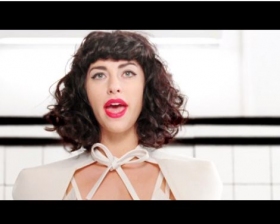 New Zealand singer and songwriter Kimbra has released an exclusive music video in support of her latest single "Come Into My Head". The singer scares the doctor and the nurses with her bizarre yet fierce dance movement that matches the tight beat of the song. She keeps them all locked up in the ward with her.

Best known as the female vocalist in Gotye's smash hit "Somebody That I Used to Know", she includes her single "Come Into My Head" in her debut album Vows. The album got released in summer 2011 in New Zealand and officially will hit the stores in the U.S. a year later.

Though we see Kimbra spending most of the video repeatedly inviting us to come into her head, we think it's safe to say that between the infectious song and its striking video, it's going to be the other way around. Here's the clip.

Kimbra's collab with Gotye brought her to sit at No. 1 on Billboard Hot 100, making her the first solo New Zealand artist to claim the top spot on the U.S. single chart. In 1977, Manfred Mann's Earth Band reached the summit of the chart with their single "Blinded by the Light".