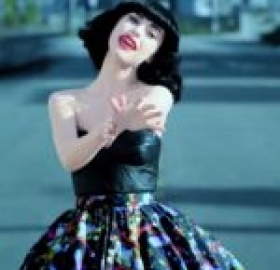 While Kimbra's voice has firmly remained in our memory due to her Gotye-collaboration on the smash hit "Somebody That I Used To Know", she has now returned with her brand new clip in support of the Vows single "Two Way Street".

The dreamy video, directed by Matthew Rolston shows the singer in a dainty outfit with a puffy and colorful skirt, that features a dazzling fest with feathers, fireworks and Kimbra's ruby-red lips. Kimbra is seen pursued by a man in a suit through movie theaters and forests as she sings, "And there's no conspiracy/ Behind the way two hearts meet/ When love is a two way street/ And I think I'm ready."

The light and breezy track comes from the Kiwi singer's debut album Vows, released in the U.S. on May 22 and debuted at No. 14 on the Billboard 200. Kimbra has previously described it as "an eclectic mix of songs and explores the themes surrounding the making of promises and the breaking of them," and lists Prince and D'Angelo as some of her influences for the record. Watch the new clip in here.

The 22-year-old singer has signed a management contract with a company in Melbourne when she was 17 and began working on her album then. But Kimbra started receiving attention on a global scale after she was featured on Gotye's smash single, "Somebody That I Used to Know", making her the first New Zealander to hit No. 1 on the Billboard Hot 100 since 1977.

"Somebody That I Used to Know" single has also topped the singles chart in 5 countries worldwide and achieving 42 Million Youtube Views and counting in her own right.

Kimbra claimed Best Female Artist at the Australia ARIA Awards in November before jet-setting to L.A. to prepare for the US release of her debut album 'Vows' and much anticipated US dates at SXSW 2012.