I want it to represent Kelis’ world. When you put on my record, I want you to feel that you've entered into a new dimension, some place where you haven't been before. You know when you go to a carnival and there's a funhouse where the colours are different and the music is distorted? It's reality but it's not really reality, you know what I mean? I kind of want it to feel like that…

It's just under two years since we first got a chance to step into Kelis' world. Her debut album, Kaleidoscope, was a landmark record of psychedelic sci-fi soul that moved in an orbit all its own. When you take the generosity of spirit and higher love of vintage Stevie Wonder, give it the space age treatment of production superheroes The Neptunes, and add a born superstar barely out of her teens, you've got something very special indeed.

Last year, this “something very special” secured three Top 40 hits (“Caught Out There,” “Good Stuff” and “Get Along With You”), and cleaned up on the awards circuit, scooping the Brit for “Best International Newcomer,” the Q award for “Best video” (“Caught Out There”) and the NME gong for best “R&B Singer.” Kelis remembers: "As an artist you learn how to make the business, but all you really want is respect for your work. The fact that it happened at the first go around is kind of amazing. It was a surprise that anyone listened at all!"

They'll be listening again to Wanderland. Even more fearless than Kaleidoscope, it again rewrites the script, flinging the purest soul to the furthest sonic reaches. Pharrell Williams describes it as "Retro-pop. Year 3000. But retro. That doesn't make sense, but that's how we are." Complimenting Pharrell’s portrayal of their sound and style, Kelis herself sheds light on the title’s significance: "We're all wandering in this world searching for something, and this is my search."

Kelis' search began in Harlem, New York in 1980. The daughter of Pentecostal Minister Kenneth, and children's clothes designer Iveliss (hence Ke-lis), Kelis Rogers was always as individual as her name. The youngest of three daughters, she began travelling across America with her father (also a jazz saxophonist) to sing at his sermons, while soaking up the classic soul her mother played.

With a defiantly independent streak, it is no surprise Kelis didn't fit in at her predominately white Upper East Side private school. At 13, she was already looking elsewhere, becoming a model on the covers of fashion and teen magazines. A year later she enrolled in LaGuardia, the performing arts school immortalised in the movie, “Fame.”

Her first proper venture into music was a girl group called BLU (Black Ladies United), which didn't last long, but procured the ears of hip-hop producer Goldfinghaz, who gave her a spot on the second album by RZA side project, Gravediggaz. Leaving home at 16, she struck out on her own. It wasn't easy at first, but two years later she met Virginia Beach production duo Pharrell Williams and Chad Hugo, aka the Neptunes, and subsequently landed a deal with Virgin Records. Her first foray into the music world’s center stage on Ol' Dirty Bastard's delirious hit “Got Your Money,” a single which turned out to be the anthem of its time, set the stage for her first full length album, Kaleidoscope.

Even in the context of a golden age for cutting edge R&B, Kelis stood out from the crowd thanks to her sheer originality. A modern soul singer who attracts the attention of U2 and Moby, sings the praises of Basement Jaxx and Muse, defines her own image without using stylists, and has fresh and witty opinions to spare, all without throwing tantrums in hotel rooms, is not your usual off-the-peg vixen.

In the many months since Kelis’ distinct image made the world do a double take, this multi-talented phenom has certainly remained busy. "There are a lot of things that have happened, but I don't even know where to start," she laughs. “It's all one big blur. But this year things have finally settled down. Now it's more about dealing with situations rather than being surprised by them."

Dealing with these situations has allowed her to leave her mark in all circles of the world. She spent last summer taking her live show around European festivals, and subverting expectations yet again by covering “Nirvana's Smells Like Teen Spirit.” Bono was so impressed by the show’s bravado that he gave her a high profile support slot on U2's recent European tour.

Kelis has also been collaborating far and wide. In the past year, she's sung on Busta Rhymes’ “What It Is,” Moby’s “Honey” remix, Foxy Brown’s “Candy,” LFO’s “Dandelion,” and NER*D’s “Truth Or Dare.” With further appearances on Guru’s “Jazzmatazz: Streetsoul” album and the hip-hop stars’ “Phil Collins Tribute” album, partnerships with rappers Outsidaz and German trance innovator Timo Maas are on their way.

And of course, there’s Wanderland. The album was recorded at her house in Virginia Beach with The Neptunes. And while the duo was credited with writing most of Kaleidoscope, this time Kelis took the song writing reins. "It was inevitable," she explains. "It's like you start off at a job, and the next year you get a promotion, you know what I mean? I wasn't ready last time, but (now) I had a much clearer idea of what I wanted to do."

This makes Wanderland a much more autobiographical record than its predecessor. “Easy Come Easy Go,” which features Korn's Fieldy on bass, tackles men’s responses to Kelis since she became famous. “Digital World” deals with the toll that last year’s touring schedule took on her love life. “Star Wars,” meanwhile, is a comic book-inspired anthem for the Star Trak clique, the collective of rappers and singers that she and The Neptunes have assembled. Apart from Fieldy and No Doubt (who play on “Perfect Day”), they're the only guest musicians on the album -- a refreshing change from the usual big name bombardment. "They're big names,” Kelis states as a matter of fact. “The people that I know are incredibly talented, so why go outside when you've got it at home?"

As for striking first single, “Young, Fresh & New,” Kelis retorts: "First of all, people that are older than me and have lived their lives differently are always questioning how it is I run my life. So (this single) is sort of like, ‘Nah-nah-nah-nah-nah. I’m 21, I’m happy, I’m doing exactly what I want, and who the fuck are you to tell me that I can’t?’ And also, I think it’s a reminder for those that maybe aren’t doing the things they want to do that we have the right to. It’s about taking a step and asking questions and recognizing that (we all) deserve more from life."

Kelis isn't sure what the future may bring. She plans to start a range of accessories called “Mizrebelle” this autumn and perhaps a clothing line with Pharrell, in addition to waiting for the right movie script to pop through her door. Beyond that the possibilities are wide open, and that's just the way she likes it.

In Kelis' world, there's still plenty of wandering to be done. 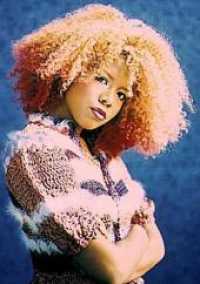