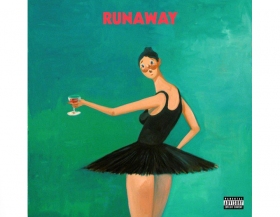 After getting limited screenings in Europe and United States, Kanye West's much-hyped short film "Runaway" has finally been made available for public viewing pleasure. It follows the rapper bringing home a Phoenix who accidentally falls to Earth. He takes care of her and she tries her best to fit into modern culture.

"I make her my girlfriend, and people discriminate against her and eventually she has to burn herself alive and go back to her world," Kanye told MTV. "I've been feeling the idea of the phoenix. It's been in my heart for a while. It's maybe parallel to my career. I threw a Molotov cocktail on my career last year, in a way, and I had to come back as a better person."

Directed by Hype Williams, the music video was filmed in Prague. Kanye plays a man named Griffin, the Phoenix is portrayed by former Victoria's Secret model Selita Ebanks, and providing the narration at the beginning of the clip is Nicki Minaj in her British accent.

Since the movie is to promote his November 22 release "My Beautiful Dark Twisted Fantasy", the songs featured in it are the ones which make the cut to the upcoming album.

Watch below the Official short movie of kanye West "Runaway" :

This is the Tracklisting of Kanye West's soon-to-be-released studio album "My Beautiful Dark Twisted Fantasy" :