New Song: Kanye West 'Take One For The Team' 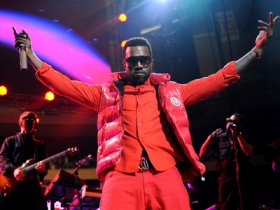 Kanye West brings "Take One for the Team" to his fans this weekend. The song features Keri Hilson, Pusha T, and Cyhi the Prince.

Seems like each week Kanye's collaborations just get bigger and better! Keri Hilson is certainly working hard on her music. Her sophomore album No Boys Allowed will release on November 30. As for Kanye, his album, My Beautiful Dark Twisted Fantasy, will drop on November 22.

With Kanye West's Good Friday, he has been sharing new singles with fans each week. This decision was made back in August when Kanye decided that leading up to Christmas, he would be releasing one new track every Friday as announced in the tweet, "I know y'all need the music so I'm dropping 1 new song every weekend until Xmas. It may be my song; it may be a new Jay song, etc."

Take a listen to Kanye West's "Take One for the Team" and let us know if you like this song.