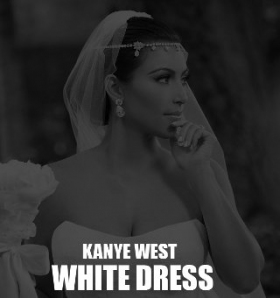 Kanye West surprises us with another track "White Dress", even though he is still burning up the airwaves with his "Cruel Summer" album.

The romantic song includes the lines" "Now she back in the club in a tight dress with dreams of someday wearing a white dress," with the refrain, "Even though I met you in the club in a tight dress/At first sight I could picture you in a white dress." These lyrics may have implications about his new romance with Kim Kardashian - it is rumored that the wedding bells may ring for the couple.

“You the type of girl that probably deserve a new last name, but they never let us do our thing/ Everybody lying on who I bang/ We was on fire, but they blew our flame/ Ain’t no denying baby, you have changed,” he raps.

The West source, RZA, says that his wedding plans with Kardashian are only speculation. "He's just trying to make dope songs," the source says. "As has always been the case with Kanye's music, people will interpret the lyrics to apply to his life or their own. That's the beauty of it."

RZA affirms that the track is “Basically talking about some of these girls, you know you maybe want to make a wife out of them, but they gotta get it together.”

Listen to "White Dress" snippet below.