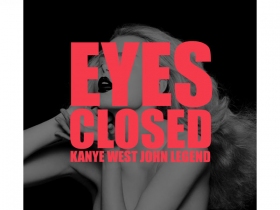 Eyes Closed is said to be from Kanye West's My Beautiful Dark Twisted Fantasy album and is said to be linked to an upcoming Snoop Dogg project, but as it stands, the track is simply a pretty chill John Legend collaboration. The track carries with it an entirely different personality than those dropped through Fantasy or Kanye's 2010 G.O.O.D. Friday releases.