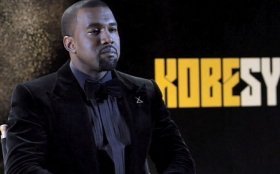 Funk Flex dropped off Kanye West's latest single-collaboration with DJ Khaled titled "Theraflu" which is rumored to be included on the DJ Khaled's new project Kiss The Ring, out soon. The Hit-Boy produced song features the rap mogul confessing his love for Kim Kardashian in the track, and he manages to taunt her estranged husband Kris Humphries in the process.

"I'll admit, I fell in love with Kim/'Round the same time she fell in love with him/ Well, that's cool, baby girl, do your thang," he voices his support for Kim before mocking the athlete who plays for Jay-Z's New Jersey Nets, "Lucky I didn't have Jay drop him from the team."
The Roc Nation signee continues his verses by praising his upcoming music: "Shut the f-ck up when you talk to me 'fore I embarrassed you/ G.O.O.D. Music, we fresh, we fresh/ Anything else, we detest, detest".

Meanwhile, G.O.O.D. music family is set to release the first initial single from their much-anticipated family project on Friday, April 6th. Take a listen to Kanye's "Theraflu" new single below: