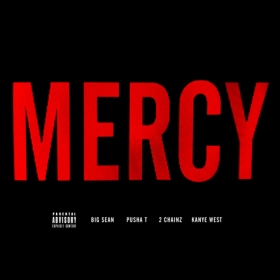 One day after leaking the new single "Theraflu" off his upcoming studio effort, the G.O.O.D. Music chief has unveiled the first official track titled "Mercy" which features a several famous rappers such as Pusha T, Big Sean, and 2 Chainz. First titled Lamborghini, Murci it opens with Sean ("White girls politickin' that's that Sarah Palin"), followed by Pusha T ("That white frost on that pound cake, so your Duncan Hines is irrelevant"), then Yeezy, and 2 Chainz.

"I threw suicides on the private jet/ You know what that mean, I'm fly to death/ I step in Def Jam building like I'm the shit/ Tell 'em give me 50 million or I'ma quit/ Most rappers taste level ain't at my waist level," raps Ye, who is bound to replace "that shit cray" with his new catchphrase "swerve."

There's no word on when Theraflu will be released as an official single, but until then you may listen to G.O.O.D. Music's next single "Mercy" feat. Big Sean, Pusha T, 2 Chainz in here:

John Legend, Frank Ocean, Mannie Fresh, Common, Kid Cudi and Marsha Ambrosius, among others are the recording artists set to appear on the LP while producer Hit-Boy joined West in London for some beatwork as well.