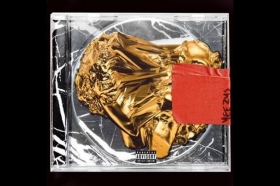 In a post that rapidly travelled around the hip-hop world, Kardashian Instagramed what appeared to be the album's cover, as well as the rumored title, Yeezus. The picture includes a CD case with what looks like a melted gold Jesus piece on the cover next to a pair of unreleased red Nike Air Yeezy IIs, a piece of red gaffer tape with the title on it and a message.

Also, the revealed release date for the album is June 18.