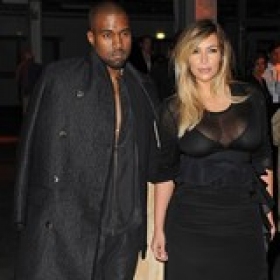 Kanye West is a romantic guy who is 'writing special wedding vows' for his future wife, Kim Kardashian.

The 36-year-old rapper engaged to Kim this week and it is said he wants the wedding to be the most moving ceremony ever. He is very involved in every aspect of the wedding and he wants to show how much he loves his fiancée.

'This is very special to him and he wants to make sure everything goes down the way he wants it. He's already been writing his vows, too - that's how seriously he's taking it,' a source tells Hollywood Life.

'He's doing everything, from the music, to how many guests, to the cake - the whole shebang,' the source adds. 'Kim doesn't mind either. She knows Kanye likes to sit back and take control of things. She loves it - it gives her time to be beautiful and chill out.'

Kanye and the reality star have four-month-old daughter North.