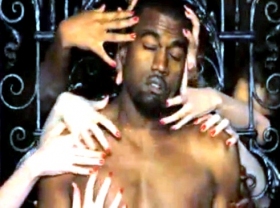 Kanye West's 'Monster' music video has finally made its way out in a final version. Directed by Jake Nava('Crazy in Love'), the clip sees the G.O.O.D Music rapper and featured guests Rick Ross and Jay-Z in disturbing scenes with a lot of barely-clothed, occasionally-blood-soaking corpses. The video is a beautiful dark twisted fantasy: models' corpses, S&M, beheadings, necrophilia, monstrous beauties attacking Kanye.

You can hear many guest vocalists: Jay-Z raps "All I see is these fake fucks with no fangs /Tryna draw blood with my ice cold veins /I smell a massacre /Seems to be the only way to back you bastards up" .

The song is one of the singles in Kanye's latest studio album My Beautiful Dark Twisted Fantasy which has been on sale since November 2010. Beside featuring Jay-Z, Nicki Minaj and Rick Ross, it also has Bon Iver lending his vocals.