Kanye West's All Of The Lights all-star single 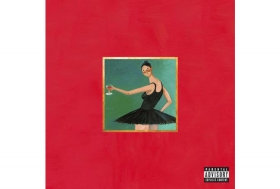 Kanye West's highly-anticipated all-star single featuring artists including Rihanna, Sir Elton John and Alicia Keys has been leaked online weeks before its release date - All Of The Light. The Stronger hitmaker was left fuming earlier this year when several of his unreleased songs hit the internet without his permission, insisting the culprit messed "everything up for everyone".

West has been the victim of a track leak again - his next single from upcoming album, My Beautiful Dark Twisted Fantasy, has hit the internet early. All of the Lights, which features 11 guest vocalists including Black Eyed Peas' Stacy Ferguson, John Legend and La Roux's Elly Jackson was leaked online via YouTube.com.
Kanye's album is due for release on November 22.

Take a listen to all-single All Of The Lights below: