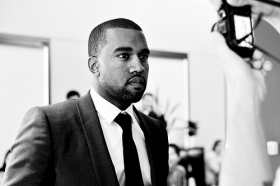 The rapper-producer, Kanye West revealed that his upcoming studio effort is due out on November 22.

"We gone kill it again on November 22nd! Even with the leaks…" West said on Twitter yesterday (October 4).

Meanwhile, West, his regular DJ A-Trak, Armand Van Helden and the likes of Vampire Weekend, Santigold and Pharrell Williams, all appear in Duck Sauce's new video 'Barbra Streisand', which sees a host of artists paying tribute to New York and, apparently, the singer.