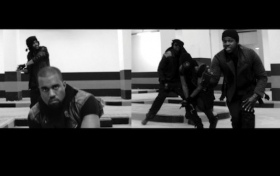 Kanye West has premiered the music video in support of G.O.O.D. Music single "Mercy" which also features the likes of Big Sean, Pusha T, 2 Chainz and Kid Cudi too. The black and white clip was filmed in a parking lot and sees each rapper spitting his verses in front of the camera. Also, the clip was shot in wide frame and multiplied the crew. The expensive Lamborghini Murcielago, which picture was released earlier this week as preview, takes the center background. The song itself is a tribute to the brand of Italian cars and the ensuing rides.

"Mercy" is a track lifted from the new G.O.O.D. Music album Cruel Summer, set for a release sometime this year. Nabil handled the directing duties and gave one of the hottest records of 2012 the black-and-white cinematic polish necessary.

A short film using the same title as the album and directed by West was premiered at Cannes last month. The 30-minute clip was projected onto seven screens inside a tented pyramid, designed to give viewers a fully immersive experience.

At the same time, a new song snippet from the album which features noneother than Kid Cudi was released online. The 52-second snippet is titled "Good Tuesday" and features the Cruel Summer lead actor's vocals. Listen to it in here.