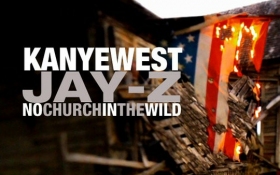 Under the direction of Romain Gavras, Kanye West premiered the music video in support of his Frank Ocean-collaboration track "No Church in the Wild" which features a violent battle between a group of protesters and the squad of riot police. Back in October, Kanye West appeared at the Occupy Wall Street protests in Manhattan, and the experience must have been inspirational to him though he was there only briefly.

Back then, he let Russell Simmons do all the talking. His new video is clearly influenced by the protests and civil unrest that took place all across the country. And it's easily one of the most visceral, relevant clips of the year.

Shot in Prague, Czech Republic the clip features neither member of The Throne, but instead focuses on two groups: protestors and the police, both at war with one another. It's an unsettling and savage clip, depicting protestors being beaten and pepper-sprayed as they mercilessly combat with the police, though the protestors-turned-rioters also inflict a large part of the violence: they destroy property, loot stores, and set fire to cars. The video refuses to take sides, as there’s no winner when a conflict turns to violence.

Before dropping the full version of the visual, Yeezy and Hov have teased fans with a snippet during the European leg of their Watch the Throne tour. They played the clip after showing an inspirational clip that is set to Louis Armstrong's "What a Wonderful World".

"No Church in the Wild" is another one of Yeezy and Hov's tracks that comes off their collaborative album, Watch the Throne. Featuring the vocals of Frank Ocean and The-Dream, the tune has been featured in the trailers for Safe House and the 2012 film adaptation of The Great Gatsby.

Music video: Kanye West & Jay-Z "No Church in the Wild"