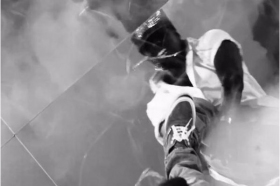 With the help from filmmaker Ruth Hogben and also Bon Iver's Justin Vernon, rapper Kanye West released the music video in support of his latest single "Lost in the World". The clip features the rap mogul performing in a different style: he stays on a mirrored ground with clouds reflected on it. At the same time, scenes with female dancers in plain white tees restlessly dancing to the song in a frantic choreography are shown.

The video is shot in black and white by filmmaker Ruth Hogben, and warns us since the beginning about the use of strobe effects which could potentially trigger seizures. The clip is described as a piece that "breaks the mould of popular rap aesthetics while still celebrating the extraordinary talent that has made West a modern icon."

"Lost in the World" contains some tribal sounds and samples Bon Iver's 2009 song "Woods". It's is included on Kanye's fifth studio album My Beautiful Dark Twisted Fantasy that debuted November 2010.