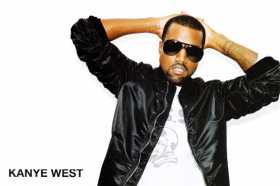 Kanye's been doing his Good Ass Job for a bit down on The Island — it was originally announced as the follow-up to Graduation, until he ran into an 808 and a heartbreak. So ostensibly the next step in Ye's educational/corporate-evolution titular trajectory album's due this year, guests reportedly include Q-Tip, Pete Rock, and production pitch-ins from No I.D. On "Power", the first single to leak from the sessions, it's soul man Dwele (last seen working with Yeezy on "Flashing Lights") throwing down while Kanye's "tripping on all the power", later on all the "powder", and later 'drinkin' and drivin', and rhyming "power" with "Austin Powers," and abomination with "Obama's nation." Granted those rhymes are more The Grade School Drop Out than post-Graduation, but as always the production’s the pull — a slightly sped-up group-vocal sample with handclaps to match (Sound Of The City pegs the sample as King Crimson's "21st Century Schizoid Man") — and this might be after Hearbreak, but shit is still dark in Kanye’s world. The song ends with Dwele's crooning "Jumpin' out the window, letting everything go…" and West's punctuation: "Yeah this would be a beautiful death."